Love in the Time of Corona

Happily Ever After and Then What? Flirting at High Altitude

Things didn’t turn really weird until after the selfie. Undeniably, there I was, a 50-year-old married woman, yanking up the shirt of a 40-year-old stud while he sported his rock-hard abs for the camera.

There were actually two of us holding up his shirt exposing the trophy abs. And it was at lunch time, in full view of a roomful of skiers in a Rocky Mountains chalet. In fact, our group of middle-aged women had been happily eating our raclette, when a 70something Spaniard climbed atop his chair, clunky boots and all, and began vamping to the nightclub-worthy sound system. Even, and especially, when he nearly fell off of his chair in his attempt to remove his clingy performance turtleneck–with his silvery mane askew and his neighbor catching and scooping his rear end, front loader-like, into an upright position–the Spaniard was magnetic, adorable, and irresistible.

What else could we do but join in the gyrations?

Ours was a table of 16 middle-aged women on a girls weekend, enjoying one another’s company, the sublime ski conditions, and a brief respite from the routine of our jobs and families. No harm there. But the joie di vivre of a tableful of mostly blonde, well-preserved dancers did not go unnoticed.

Soon tequila shots came our way, followed by champagne on the house. At least two bottles were shaken and sprayed up into the ceiling fans, sparing no one with its bubbly shower. Scrums of men, some equally middle-aged and clad in garish ‘80s ski suits, some cuter and almost young enough to be our sons, tentatively, and then less tentatively, approached our table.

One of our group threw the contents of her shot backward over her head, only to land smack in the face of the best-looking guy in the room. Dripping and drenched, he beamed. Seizing the opportunity, his pal asked if we were familiar with his friend’s rock-hard abs?

Assuming Mr. Abs would also like a souvenir of this other worldly ski lunch, I attached the photo in a text, handed him my phone, and asked him to punch in his mobile number. As he was tapping, my exuberance got the best of me. “Pretty clever way to get your phone number, eh?”

The faintest frown momentarily disturbed the line of his chiseled jaw, but then resuming his smile, he continued to push keys.

When he handed my phone back I was genuinely astonished to see that he had deleted both photo and text.

I punched him in the stomach, not hard, but hard enough to reveal my displeasure.

I flashed my wedding ring before his eyes, saying something like, “Come on, I’m married. I was just kidding about wanting your phone number.”

“I’m married, too,” he said, holding up his hand with its telltale band.

Feeling license for greater candor by his mutual admission, I confided, “Isn’t that one of the best things about getting older? I mean, whom are we kidding? We know it’s all pretend. My husband knows my next moves as well or better than I do.”

He stared at me, dazed. “I don’t understand a word you just said.”

I stared back at him, marveling over how impossibly gorgeous he looked even as little driblets of champagne fell from that strong chin. With the heat and the noise and the moisture, we could have been in a sauna.

Was I to be swept up in the fervor of a vacation fling with this moist man of mystery, who had just told me that it is possible to operate on two separate and distinct planes? Would we suspend our lives for a few days, bring out the best in each other, reconnect to our youthful, spontaneous, risk-taking selves, then return to our spouses and families rejuvenated?

Or, during our high-altitude affair, would we tumble crazily, head-over-Nordica boots in love, and realize that we could not live without each other, domestic fallout be damned? We’d all heard stories of that happening–love strong enough to conquer messy divorce proceedings, child support, and every other week visitation rights.

There was a time when my inner coquette would have handled his comment flawlessly, playing along to see where it led. But after 20 years of marriage and 17 years of motherhood, my breezy girlish repartee had abandoned me. All weekend I had been eying the slopes, particularly the tree chutes, through the eyes of my husband and two sons. Skiing is a central part of our family life, forged over years of weekly pilgrimages to my husband’s native Vermont. He grew up in a ski area, and his idea of a first date was to teach me how to telemark ski. On ice. The fact that I not only survived that day, but could still muster a weak smile through a hematoma, blossoming purple and menacing on my upper right thigh, told us both that this must be love. Over the past two decades, our most romantic and quality family times have occurred on skis, snowshoes, bicycles, and over campfires in “our” Vermont woods.

So even amidst this hothouse chalet scene, as I gazed at Mr. Abs, puzzling over what must be going through his head, my own was still filled with firm family visions and well-engrained marital assumptions. The frolicsome environment wasn’t going to change my identity as a wife and mother. After this trip, I knew I would return to my suburban Boston life, and resume an upstanding routine that would scarcely ruffle the frocks of our prim Puritan forebears.

Attempting levity, I replied, “What, is your wife going to kill you if she saw this photo?”

His silence told me it was time to return to my table.

This awkward encounter weighed on me. Had I been married so long that I’d lost sight of appropriate boundaries for light, but slightly flirtational conversation? Had I lost my touch? Had two decades of housewifery—from those glorious campfires to the less glorious but equally routine Target sprees for cat litter and laundry detergent–stamped out my inner coquette and replaced her with, dare I say it, an inappropriately frank Yankee matron?

After lunch, clicking into my skis and speeding downhill, I pondering the poles of fidelity and frolicking. Was clandestine, guilty fun the only viable option for groups of single-sex friends at a resort town like this? Were mature adults mature enough to handle a co-ed happy medium?

The next night presented me with further opportunity for research, when our group headed to a real nightclub, with an equally real and throbbing sound system. This time, dressed in a slinky black jumpsuit and high wedge heels, I found it easier to quash feelings of my inner matron.

As the evening progressed and the scene in the club became almost comically and fantastically wild, it became downright natural.

“You don’t want me gambling your money, I barely know how to play,” I protested.

“Aw come on darling, it’s all for charity anyway. We’ll tell you when to hold and when to hit.”

They were hunters, for flying fowl, not women. They were so good natured, and non-threatening, that they managed to make me feel like losing five hands in a row was the most normal thing in the world. Parting with $500 has never been so much fun.

While at the card table, over my losing hands, I had noticed out of the corner of my eye some of my Atlanta and Southern Californian colleagues routinely popping into the room, grabbing a gentleman by the lapels, and then doing a loose version of a Conga line choo choo train with him toward the dance floor. At first I watched them as an anthropologist might, detached and studiously observing their exotic behavior. But emboldened by their example–these women were happily married and middle-aged, just like I was, and nobody seemed to bat a cross eye at their behavior—I decided to follow suit.

I never worked up the nerve to do the spontaneous lapel grab, but over the course of the next half hour, I did manage to kiss a Brazilian businessman on the cheek, be kissed on the cheek by an Australian in a cowboy hat, and have a drink spilled down my leg by a blind X Games participant. (This last event transformed from maddening to charming only later, after I learned of the dancer’s identity.) Incredibly, or perhaps predictably, all of these things happened beneath a sliver-mirrored disco ball.

Why am I telling you this?

If my encounters with gentlemen and out-of-the-ordinary behavior during the trip had truly meant something, I likely would not be dwelling on them here. Correction: had meant something “threatening.”

Here’s the truth: since returning from my Wild West trip I’ve had a hard time putting it out of my mind. Like some sort of benevolent hangover, memories of the antics, the dancing, the gambling, and the overall merrymaking atmosphere that permeated the air of the entire village like a romantic anesthetic routinely come back to me and leave me in a smiling stupor.

At this stage of my life, this is a welcome development.

Most of the time, my love life feels admittedly more archaic than modern. The greatest conflict and drama under our roof these days tend to involve reminders of teeth brushing, disputes with our health insurance provider, or whose turn it is to shovel the driveway. Happily Ever After by definition shouldn’t be fertile ground for a riveting tale.

But it can provide perfect scaffolding for one.

Up on chairs, and under a disco ball, my ladies trip added a new chapter to Happily Ever After. Its title might be “Zany, Silly Joy,” and it makes a nice complement to ones called, “Duty,” “Contentment,” “Family Fun,” and “Responsibilities.” Even better, my husband finds this chapter almost as entertaining as I do. We’re working on inserting a similar one with him as the protagonist in our ongoing love story.

“The world is full of magic things, patiently waiting for our senses to grow sharper.” This Yeats quote can be appreciated at sea level, but I’d recommend dancing on chairs at high altitude for bracing clarity.

Mr. Abs was wrong. What happens in the mountains does not stay there.

The Mother of All Waves: Crashing My Sons’ Surf Camp 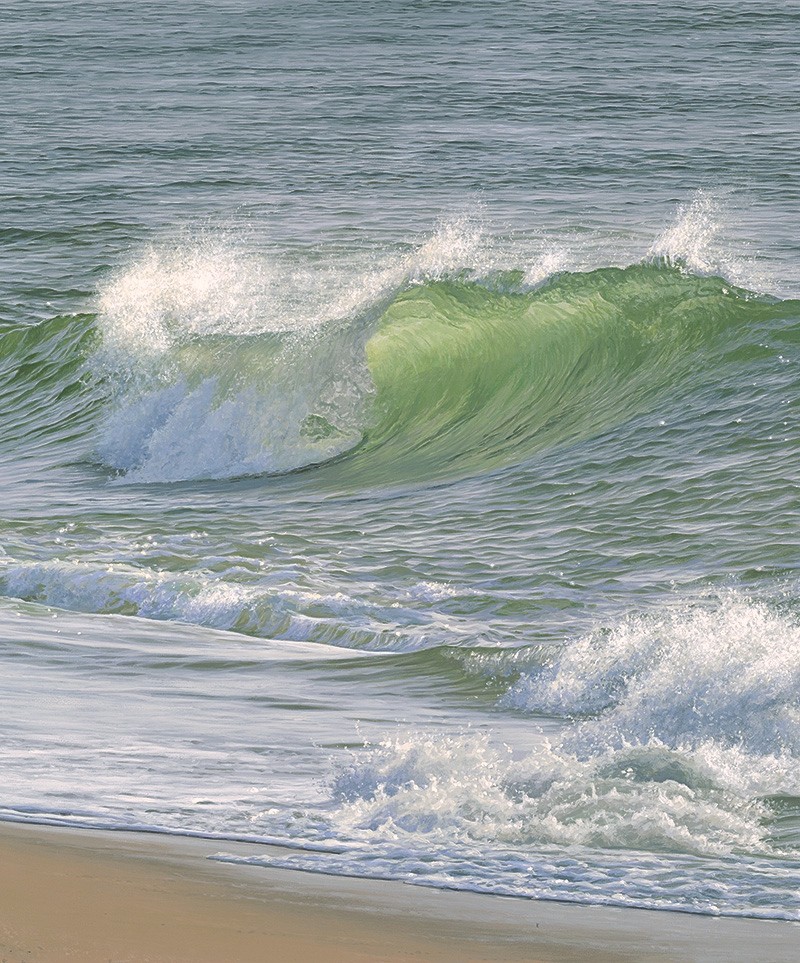 Catch a wave and you’re sitting on top of the world.

Until recently, those Beach Boys lyrics were absolutely lost on me. Ironically, it took crappy waves in Massachusetts to make them ring true. It wasn’t supposed to happen this way. After all, I grew up in Southern California, wore my share of bikinis, even paid visits to Rincon, the Wedge, and Waikiki. Surfing culture was all around me: a given, like smog and traffic, but one whose allure I chose to ignore. Diss, more like it.